After two months sailing the fjords along the mainland east of Vancouver Island, I’ve pulled into Port McNeill to pick up some new sails, restock supplies, and do some minor repairs.

Although the past few weeks has seen a lot of rain, the weather has been amazing through early summer, with no rain what-so-ever.

The fishing has been interesting with regards new rock dwelling bottom fishing species, particularly with the lingcod, some of which I have picked up around the 82cm mark. They really are a prehistoric looking and amazing fish I had never before encountered.

There has also been a few dolly varden, crabs, and prawns caught, but the salmon are yet to hit the rivers, which is where I’ve been focussing my attention. By all reports here in Port McNeill, they appear to be a little bit late in arriving this year.

It’s been a great stint in the fjords and I look forward to continuing further north in them, for another two months, after  the next four weeks around the West Coast of Vancouver Island.

My only disappointments are that the regrowth logging is conducted in basically every nook and cranny of these fjords so far and it’s hard to see any genuine old-growth forest remotely close to sea level.
The second disappointment is all the holiday homes dotting the islands – you literally can’t here the dolphins surfacing sometimes due to the drone of someone’s generator. It’s a shame people need to take their creature comforts from city life into the wilderness – whatever happened to preservation and camping?

I hate to finish with negatives, but I’ve waited all my life to explore this coastline and these two issues have disappointed me. I’ll keep sailing on though, and I will try to report back with a few pictures, good news, good times, and good fishing after  exploring some of Vancouver Island’s west coast. 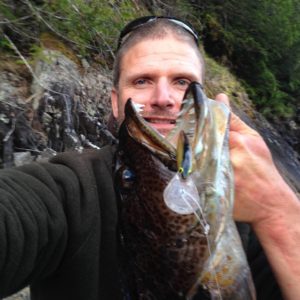 A “selfie” portrait of me and my first bigger lingcod 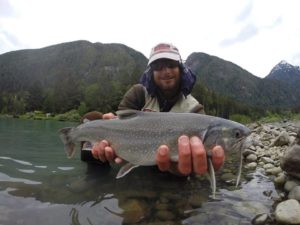 A dolly varden taken near a river mouth. 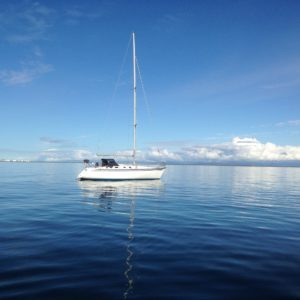